How to solve the Longest Common Subsequence Problem

STRINGSDYNAMIC PROGRAMMING
Written By
Tom Wagner
Tom has four years of experience developing software professionally, including experience at both Amazon and Pinterest. He is experienced both as an interviewer, conducting interviews on behalf of the companies he's worked for, and interviewee, as he has landed software engineering offers from Google, Twitter, Stripe, Airtable and Doordash during previous job searches.
Christopher Ang
Chris is a software developer with 7+ years of experience on both frontend and backend. He has recently completed a Masters in Analytics at Georgia Tech.

The Longest Common Subsequence (LCS) problem involves finding the longest sequence of characters present in two strings. Variations of this problem are commonly found in real world applications such as bioinformatics, natural language processing, and text comparison. This problem can be solved using dynamic programming techniques, which involve breaking down the problem into smaller subproblems and solving them iteratively.

To solve the Longest Common Subsequence problem it is helpful to first consider a couple of important properties of the lcs function. Firstly, if two strings s1, s2 end in the same substring then their lcs is the lcs of the two strings without their common substring concatenated with said substring. For example, lcs("abccba", "abddba") = lcs("abcc", "abdd") + "ba" 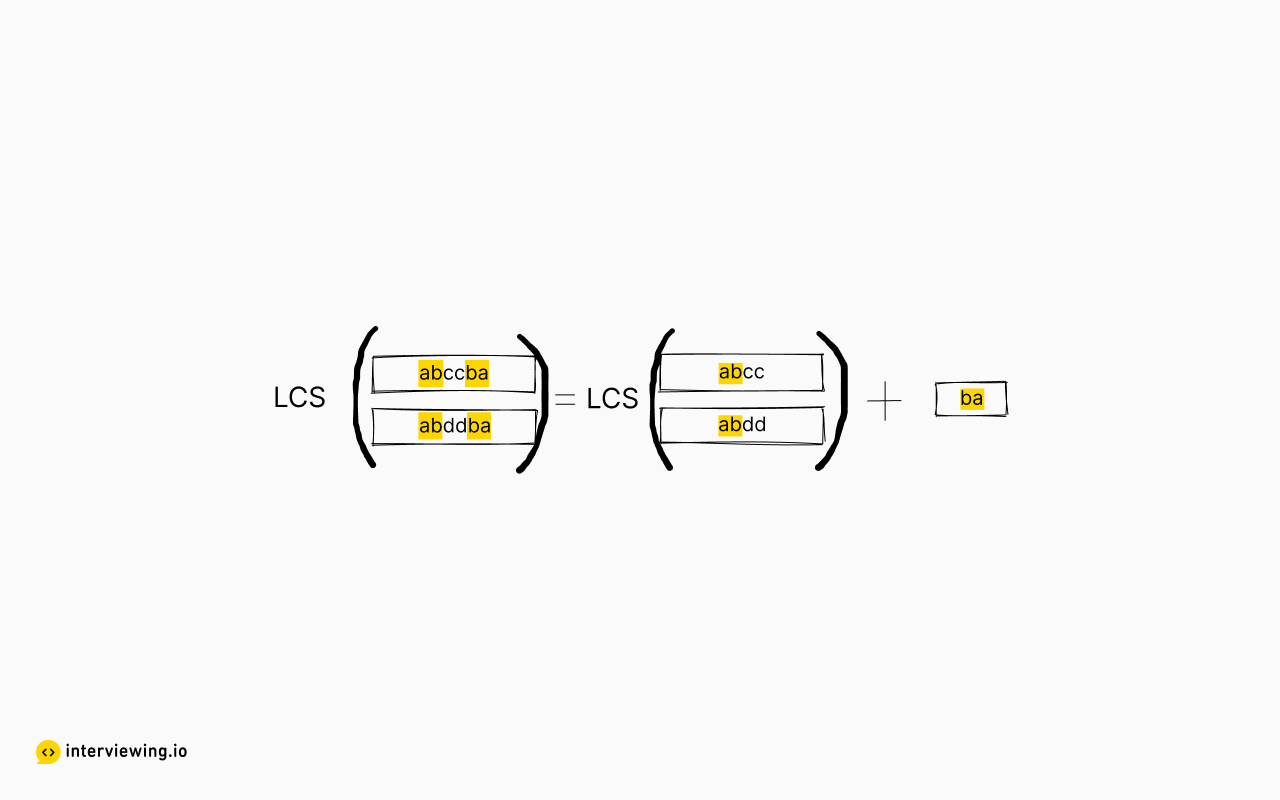 Secondly, if two strings do not have a common ending substring, the lcs of the two strings will be the same as the lcs resulting from removing the ending of one of the strings. Put another way, lcs(s1, s2) is one of two recursive possibilities: 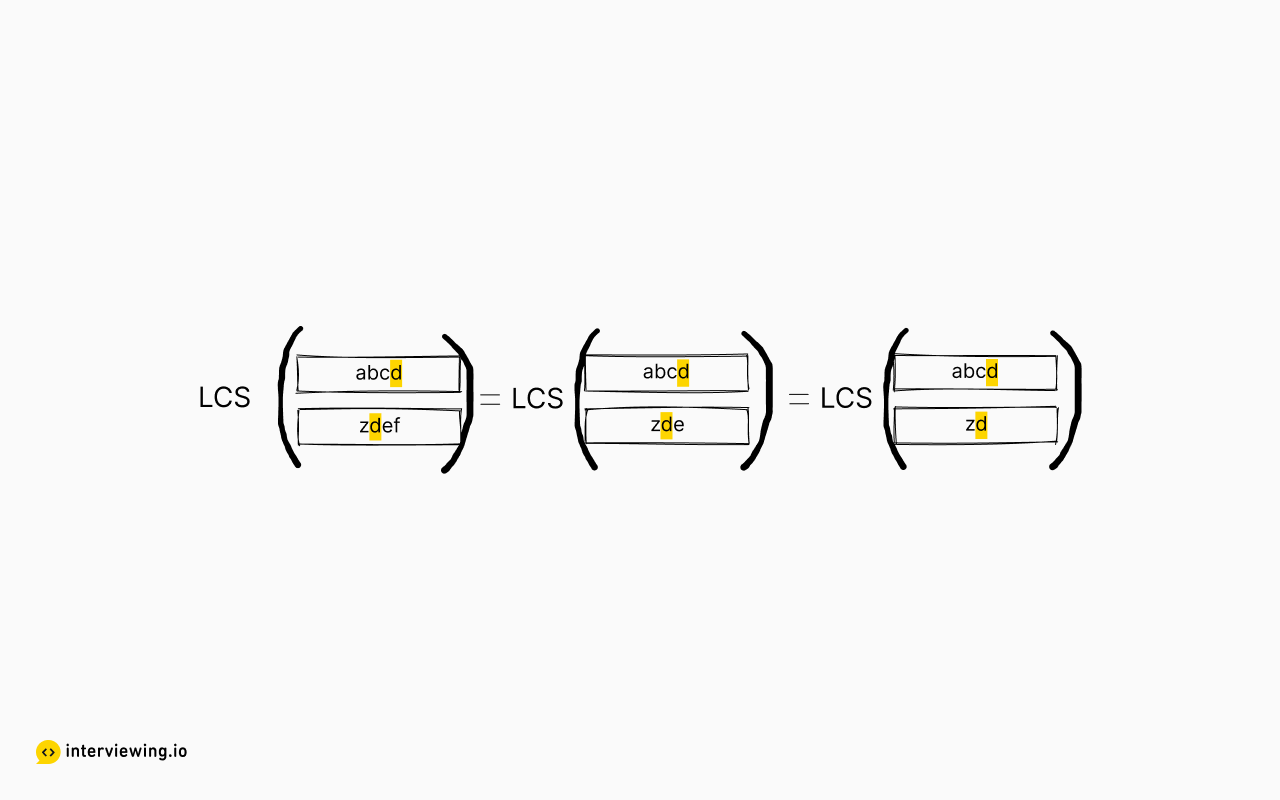 Leveraging the above two properties we can define a recursive solution to solve this problem. Starting at the end of the two strings:

Let m and n be the length of the two strings.

When implementing a recursive algorithm one thing to always look out for is repeated work. For example, if we employ the above algorithm on a string that includes the substring "abc" in three disparate locations we will effectively be calling lcs(abc) three times. How can we avoid this and improve the time complexity? By storing the lcs computations in a lookup table, otherwise known as memoization.

Due to how the recursive function is formulated, the lcs of (m + 1) * (n + 1) different input pairs will be computed. Since this solution caches those results, it has:

Notice that in the previous approaches, we relied on the fact that the problem being solved had very similar subproblems which were used to ultimately solve the original problem. Of course these types of situations can be tackled using memoization as seen above, however an even more powerful approach can be used to tackle overlapping subproblems: dynamic programming.

To solve this using a dynamic programming approach, this solution will construct a table of results, and then trace back through the table to construct the longest subsequence. Letting s1="abd" and s2="badc", the initial table would look like: 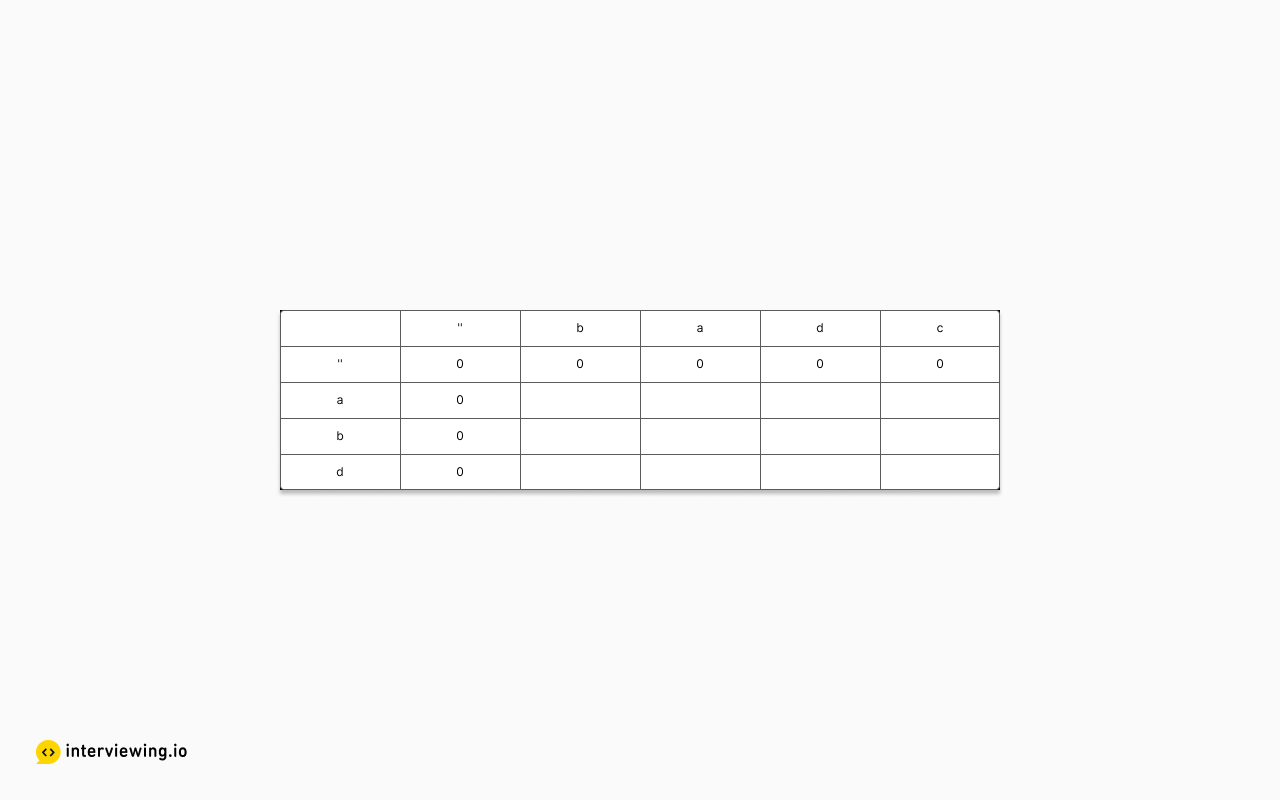 Notice that the table has been augmented with a row and column for no characters in a string. The added row and column serve as a base case upon which to fill out the rest of the table.

Continuing with the example, to fill in the first row the following would occur: 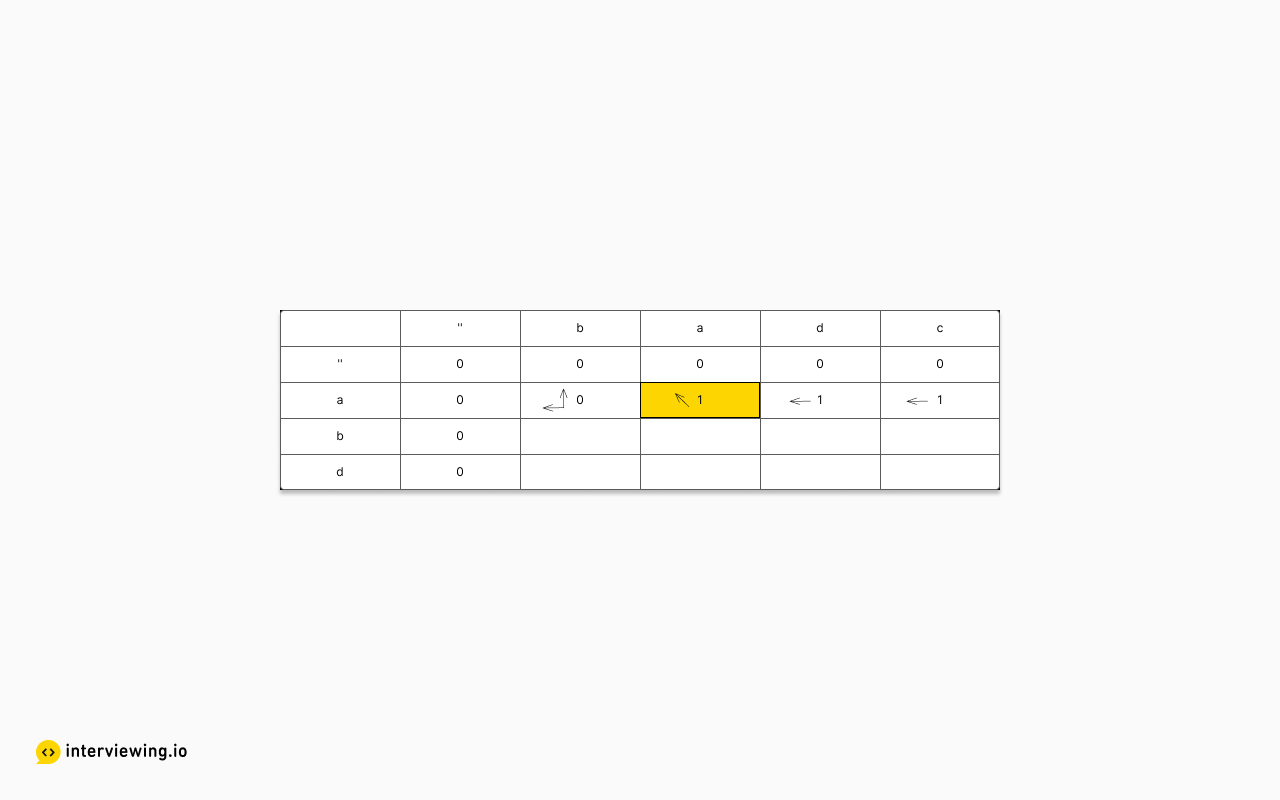 Next we fill in the second row via: 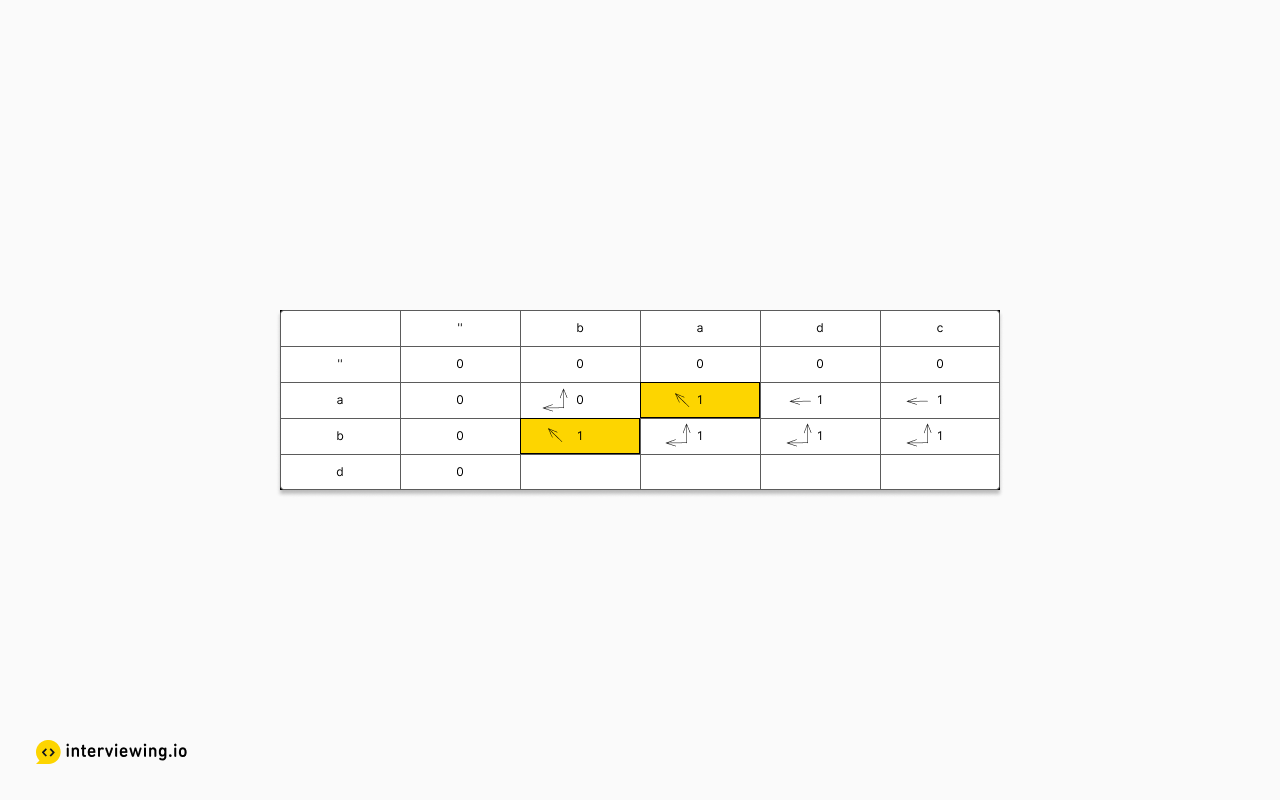 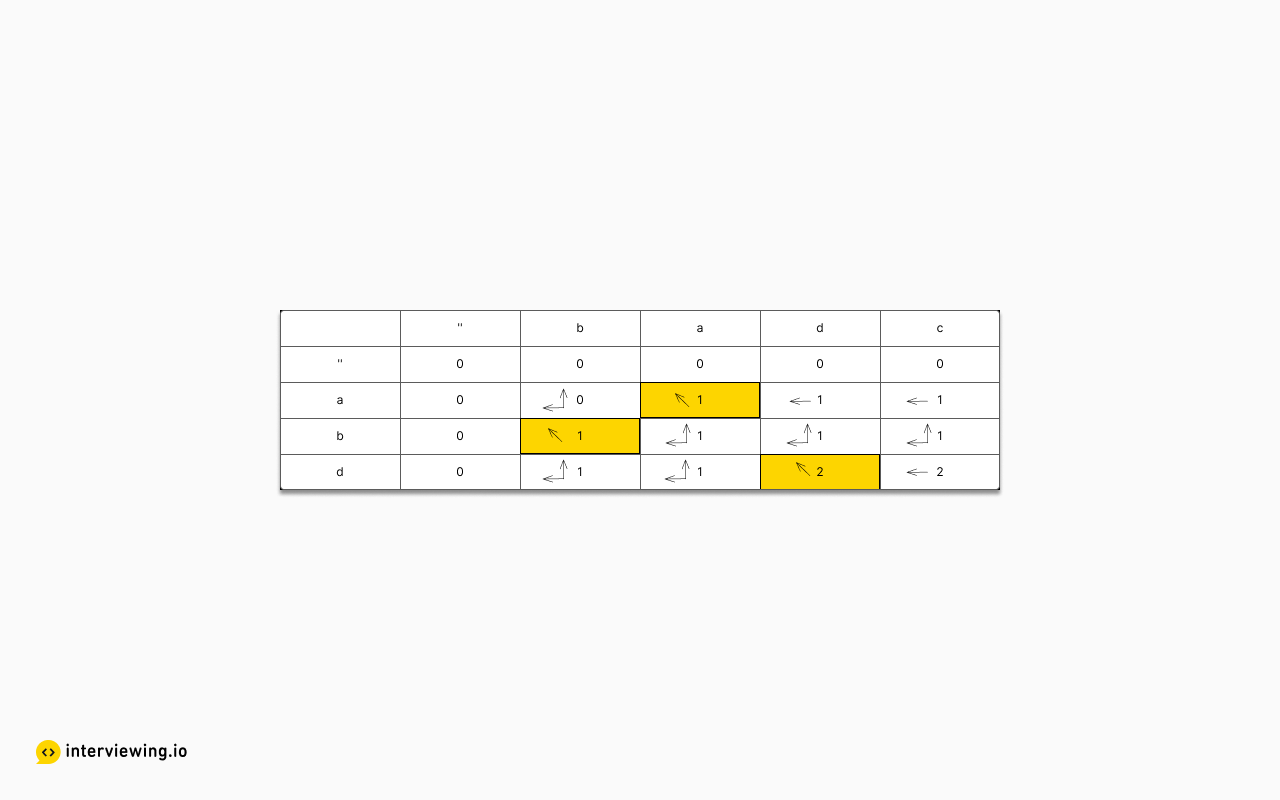 Using the example above, the traceback would proceed as follows: 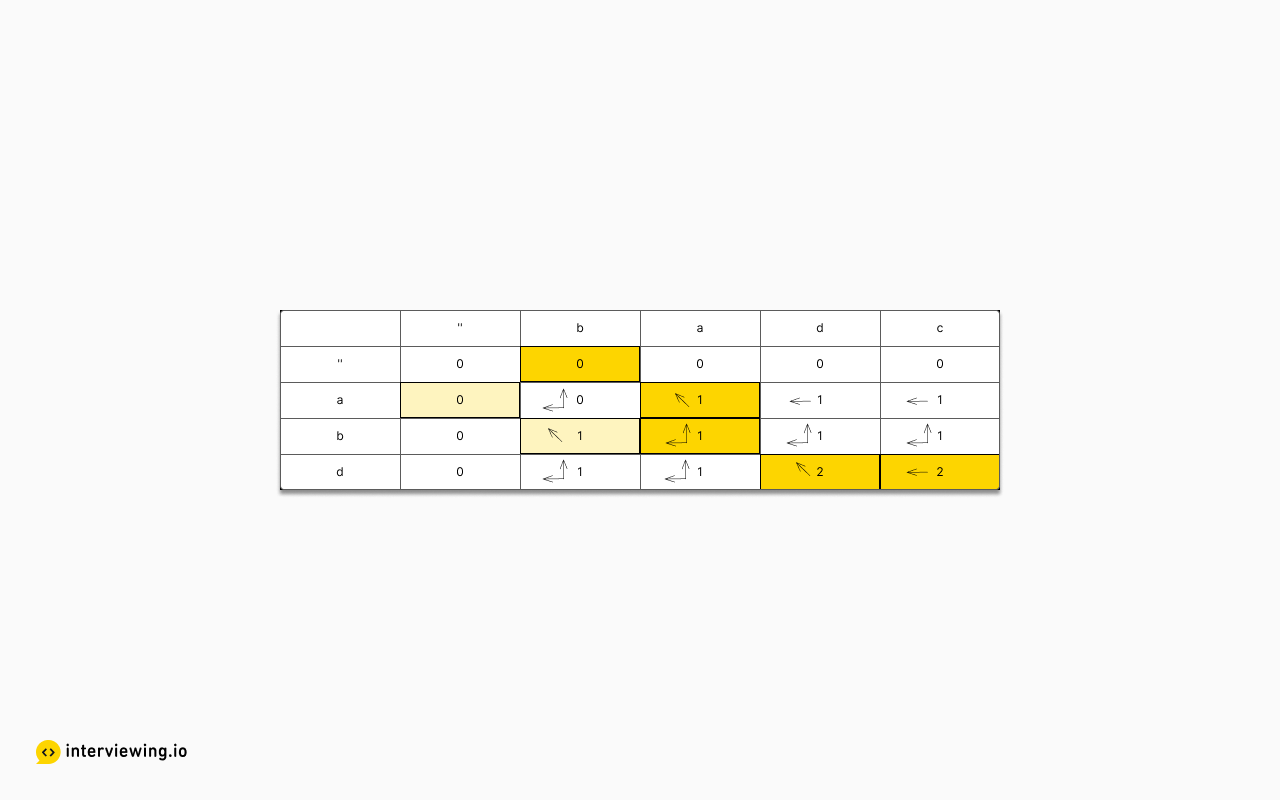 Note 1: In step 3, had the algorithm gone to the left instead of up, the lcs would have been "bd" instead of "ad".

Note 2: It is possible to store the actual subsequences inside each cell, but such a solution would need to include all subsequences that could be arrived at in each cell, which would add to the space complexity.

The final solution in this write can be further improved. One such way is the Hunt-Szymanski Algorithm.