How to solve the Simplify Path Problem

STRINGSSTACKS
Written By
Tom Wagner
Tom has four years of experience developing software professionally, including experience at both Amazon and Pinterest. He is experienced both as an interviewer, conducting interviews on behalf of the companies he's worked for, and interviewee, as he has landed software engineering offers from Google, Twitter, Stripe, Airtable and Doordash during previous job searches.
Dominic Platt
Dominic is a backend software engineer with five years of professional experience. He has worked in various tech industries from IoT to healthcare and has recently secured a position at Amazon. He has a keen interest in data structures and algorithms.

The Simplify Path problem involves taking a path as a string and returning the shortest equivalent path by removing redundant elements such as ".." and ".". This problem can be solved using a variety of techniques such as string manipulation, recursion, or using a stack.

You are given a path to a file as a string. The path can contain the symbols: “..” for the parent directory and “.” for the current directory. Convert the path into its simplified form.

Our goal is to simplify the file path. Meaning we need to return the path in its most direct form.

Let's have a look at what simplifying a file path means with a diagram which follows an example of "/home/../etc/." 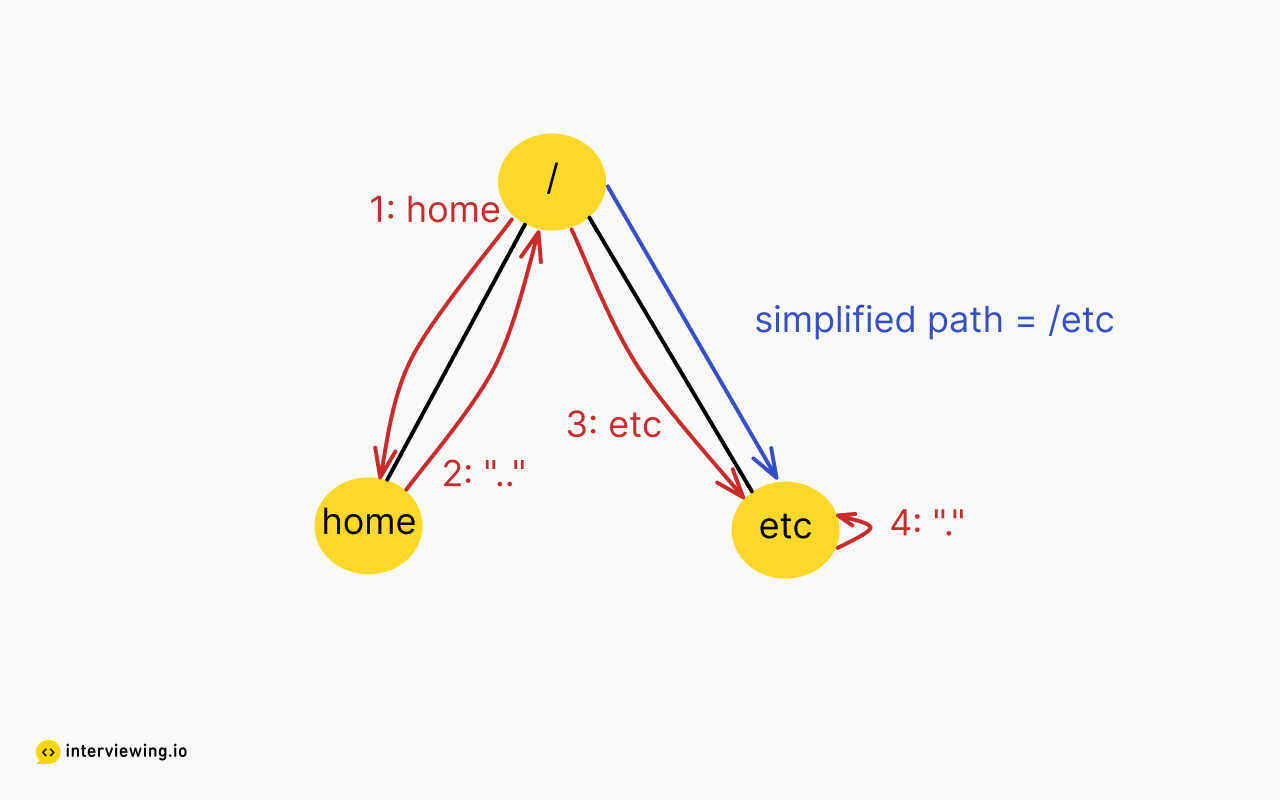 We can break down the path into a series of steps separated by "/". Starting at the root directory "/":

The simplified path is the direct path to the file. In this case, it is "/etc". Notice how we don't include the "home" directory because we navigated out of it.

With this in mind we can divide our approach into three steps:

Step 1: Parse the path string into a series of directories

How can we extract a series of steps from the string? We can see that each directory is separated by a "/" or a series of "/" characters.

Extracting out each directory is then a matter of getting the substring that is in between each "/" character. Most modern programming languages provide utility functions to split a string by a delimiter.

We need to be mindful that consecutive "/" should be considered as a single directory delimiter, and there may or may not be trailing slashes.

For each directory we encounter we need to move our directory. There are three step types that we need to handle. Each of these we can identify according to the value of the directory step.

How do we record what directory we are currently in? One approach would be to record the current directory as a string. Another option would be to use a stack where each item is a directory. We’ll examine each of these approaches in the solution.

Step 3: Return the direct path to the final directory we are in

Depending on the format used for tracking the current directory we may need to convert the path before returning it.

We utilize the "split" string utility function which returns an array of substrings split by a "/". This allows us to easily convert the path into a series of steps. This has the side effect of generating directories of "" when there are consecutive "/", however we can filter these out and move on to the next directory.

We also use the stack data structure to keep track of our current directory. A stack is a data structure in which items can be added to or removed from the end of the stack in constant time, and in our case the items are directories.

Let's take the example of "/home/./me/../you" and see how we can use a stack to keep track of our current directory. 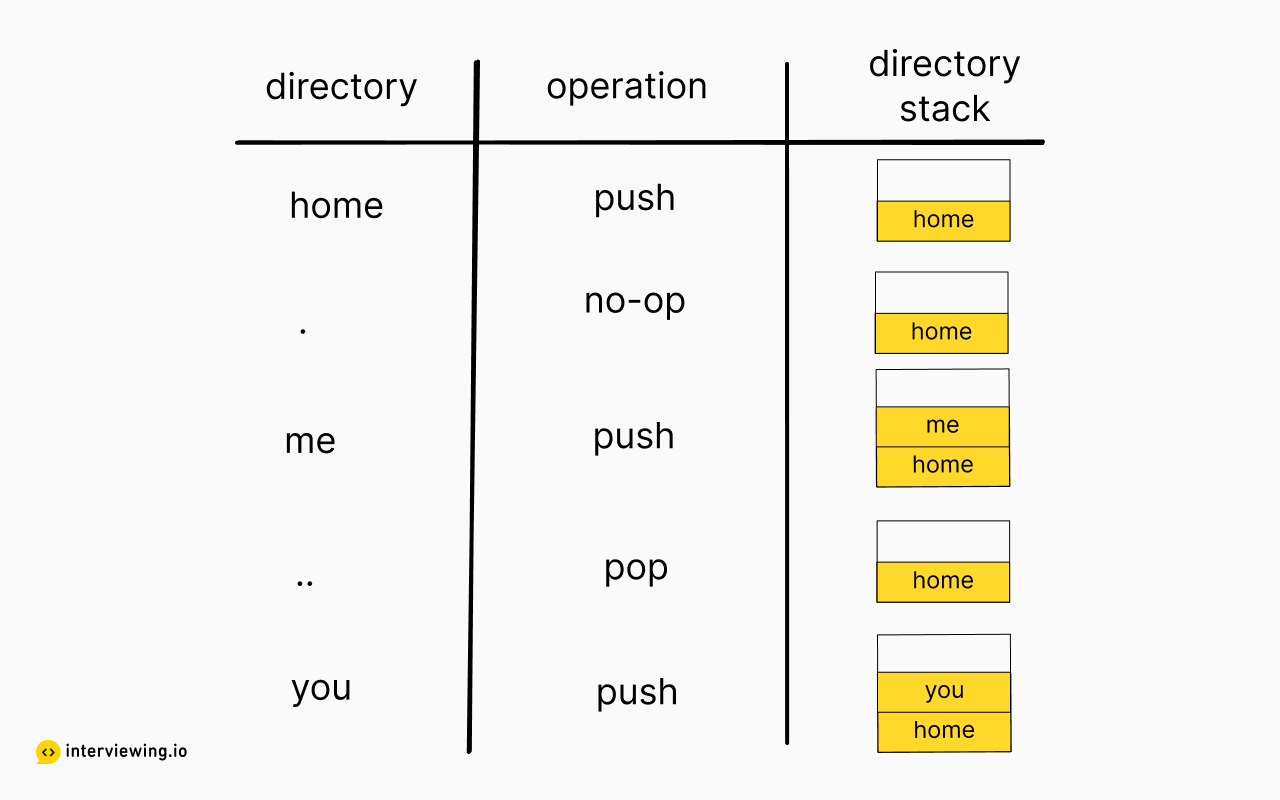 We have been keeping a track of our current directory as a stack. While this is convenient for us as we have been evaluating each step, we need to return the result as a string. To convert our stack to the simplified path we can insert a "/" char in between each item in the stack and return the result.

As an alternative to using a stack, we can parse the path string character by character. The current directory is also stored directly as a string rather than using a stack.

As we parse each character there are two cases. The character is a "/" or it isn't. If it isn't a "/" then it is part of a directory so we add it to our current directory string. When we encounter a "/" it means we are at the end of a directory and so we can evaluate the directory. Like before, the loop may produce empty directory strings so we need to make sure to filter those out.

The evaluation of each directory is handled in the same way as the previous method. The main difference is that we store our current directory as a string.

Verbally noting these tradeoffs in an interview can be a great way to signal your knowledge to the interviewer.