We built voice modulation to mask gender in technical interviews. Here’s what happened.

interviewing.io is a platform where people can practice technical interviewing anonymously and, in the process, find jobs based on their interview performance rather than their resumes. Since we started, we’ve amassed data from thousands of technical interviews, and in this blog, we routinely share some of the surprising stuff we’ve learned. In this post, I’ll talk about what happened when we built real-time voice masking to investigate the magnitude of bias against women in technical interviews. In short, we made men sound like women and women sound like men and looked at how that affected their interview performance. We also looked at what happened when women did poorly in interviews, how drastically that differed from men’s behavior, and why that difference matters for the thorny issue of the gender gap in tech. 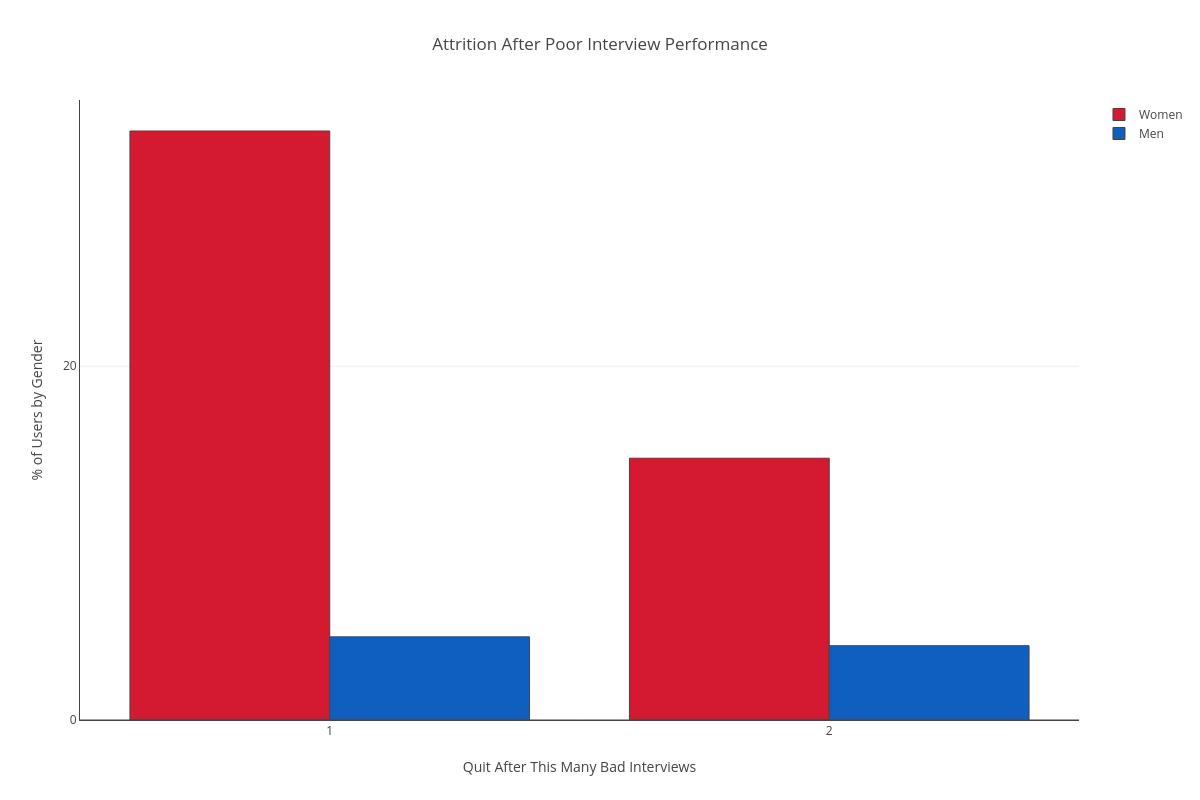 When an interviewer and an interviewee match on our platform, they meet in a collaborative coding environment with voice, text chat, and a whiteboard and jump right into a technical question. Interview questions on the platform tend to fall into the category of what you’d encounter at a phone screen for a back-end software engineering role, and interviewers typically come from a mix of large companies like Google, Facebook, Twitch, and Yelp, as well as engineering-focused startups like Asana, Mattermark, and others. For more context, some examples of interviews done on the platform can be found on our mock interview page.

After every interview, interviewers rate interviewees on a few different dimensions. 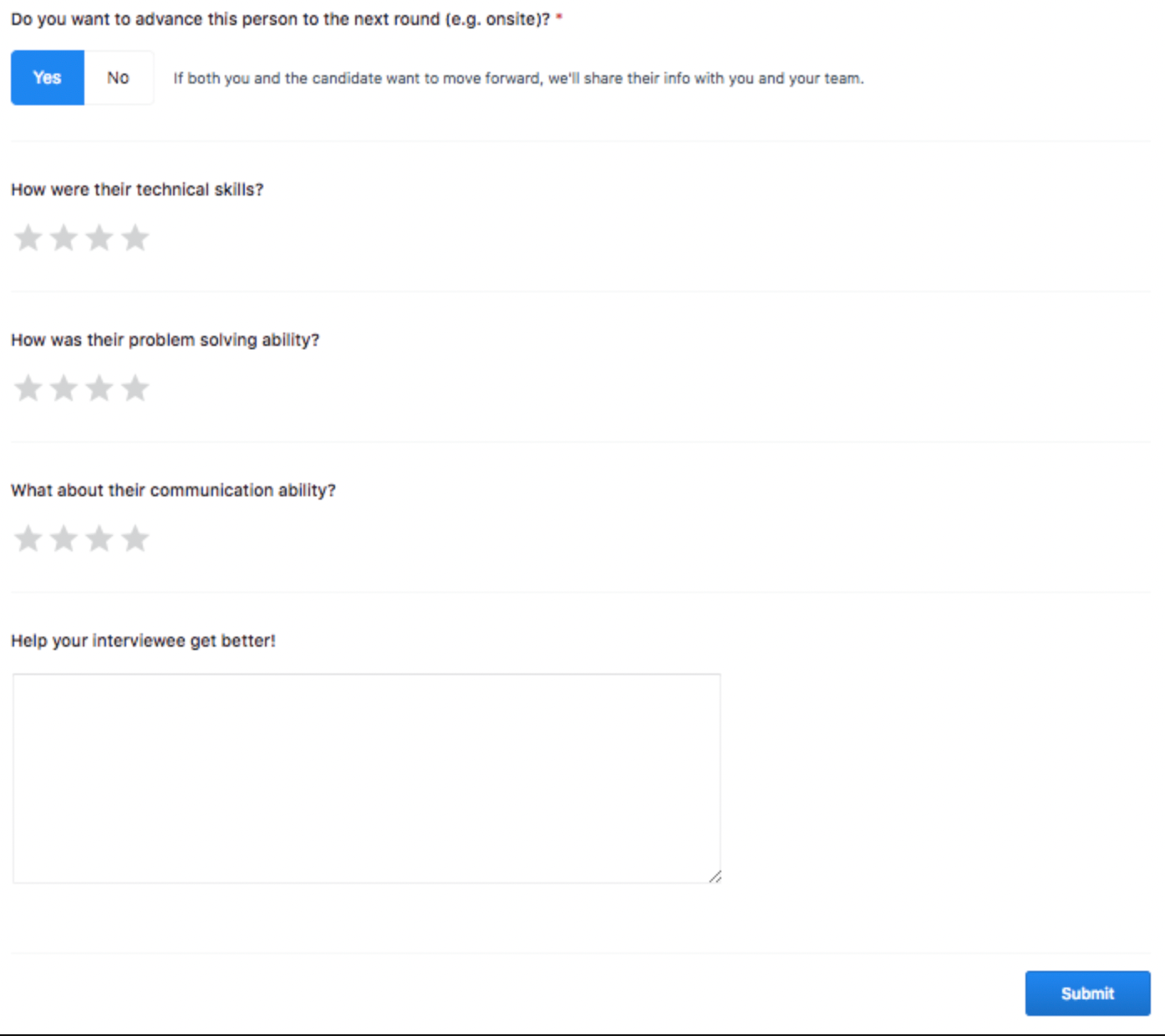 As you can see, we ask the interviewer if they would advance their interviewee to the next round. We also ask about a few different aspects of interview performance using a 1-4 scale. On our platform, a score of 3 or above is generally considered good.

One of the big motivators to think about voice masking was the increasingly uncomfortable disparity in interview performance on the platform between men and women. At that time, we had amassed over a thousand interviews with enough data to do some comparisons and were surprised to discover that women really were doing worse. Specifically, men were getting advanced to the next round 1.4 times more often than women. Interviewee technical score wasn’t faring that well either — men on the platform had an average technical score of 3 out of 4, as compared to a 2.5 out of 4 for women.

Despite these numbers, it was really difficult for me to believe that women were just somehow worse at computers, so when some of our customers asked us to build voice masking to see if that would make a difference in the conversion rates of female candidates, we didn’t need much convincing.

...so we built voice masking

Since we started working on interviewing.io, in order to achieve true interviewee anonymity, we knew that hiding gender would be something we’d have to deal with eventually but put it off for a while because it wasn’t technically trivial to build a real-time voice modulator. Some early ideas included sending female users a Bane mask. 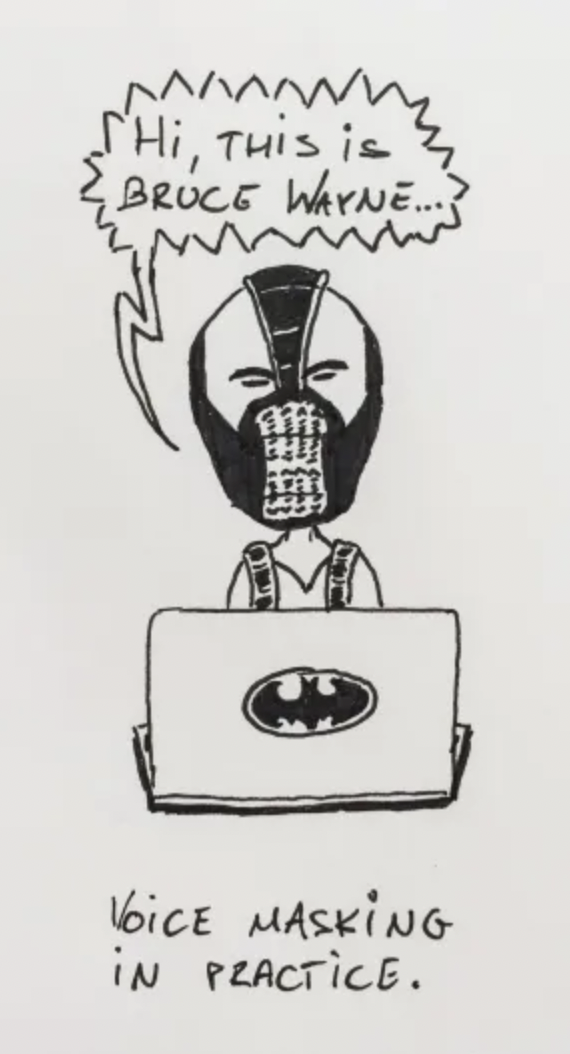 When the Bane mask thing didn’t work out, we decided we ought to build something within the app, and if you play the videos below, you can get an idea of what voice masking on interviewing.io sounds like. In the first one, I’m talking in my normal voice.

The setup for our experiment was simple. Every Tuesday evening at 7 PM Pacific, interviewing.io hosts what we call practice rounds. In these practice rounds, anyone with an account can show up, get matched with an interviewer, and go to town. And during a few of these rounds, we decided to see what would happen to interviewees’ performance when we started messing with their perceived genders.

In the spirit of not giving away what we were doing and potentially compromising the experiment, we told both interviewees and interviewers that we were slowly rolling out our new voice masking feature and that they could opt in or out of helping us test it out. Most people opted in, and we informed interviewees that their voice might be masked during a given round and asked them to refrain from sharing their gender with their interviewers. For interviewers, we simply told them that interviewee voices might sound a bit processed.

We ended up with 234 total interviews (roughly 2/3 male and 1/3 female interviewees), which fell into one of three categories:

You might ask why we included the second condition, i.e. modulated interviews that didn’t change the interviewee’s pitch. As you probably noticed, if you played the videos above, the modulated one sounds fairly processed. The last thing we wanted was for interviewers to assume that any processed-sounding interviewee must summarily have been the opposite gender of what they sounded like. So we threw that condition in as a further control.

After running the experiment, we ended up with some rather surprising results. Contrary to what we expected (and probably contrary to what you expected as well!), masking gender had no effect on interview performance with respect to any of the scoring criteria (would advance to next round, technical ability, problem solving ability). If anything, we started to notice some trends in the opposite direction of what we expected: for technical ability, it appeared that men who were modulated to sound like women did a bit better than unmodulated men and that women who were modulated to sound like men did a bit worse than unmodulated women. Though these trends weren’t statistically significant, I am mentioning them because they were unexpected and definitely something to watch for as we collect more data.

On the subject of sample size, we have no delusions that this is the be-all and end-all of pronouncements on the subject of gender and interview performance. We’ll continue to monitor the data as we collect more of it, and it’s very possible that as we do, everything we’ve found will be overturned. I will say, though, that had there been any staggering gender bias on the platform, with a few hundred data points, we would have gotten some kind of result. So that, at least, was encouraging.

So if there’s no systemic bias, why are women performing worse?

After the experiment was over, I was left scratching my head. If the issue wasn’t interviewer bias, what could it be? I went back and looked at the seniority levels of men vs. women on the platform as well as the kind of work they were doing in their current jobs, and neither of those factors seemed to differ significantly between groups. But there was one nagging thing in the back of my mind. I spend a lot of my time poring over interview data, and I had noticed something peculiar when observing the behavior of female interviewees. Anecdotally, it seemed like women were leaving the platform a lot more often than men. So I ran the numbers.

What I learned was pretty shocking. As it happens, women leave interviewing.io roughly 7 times as often as men after they do badly in an interview. And the numbers for two bad interviews aren’t much better. You can see the breakdown of attrition by gender below (the differences between men and women are indeed statistically significant with P < 0.00001).