What’s actually going on with Google and Facebook hiring freezes? We surveyed 1000 engineers to find out.

It looks like we’re entering a recession. One of the hardest things about it is the lack of reliable information about whether companies are still hiring and what hiring freezes even mean. Arguably the two most impactful eng hiring freezes were announced by Facebook (May 4, 2022) and then Google (July 20, 2022). Facebook’s freeze is allegedly partial, targeting roles below L7 and excluding machine learning engineers. Google’s freeze is allegedly all-encompassing but may only last 2 weeks. But what’s actually going on? To make some sense of a bunch of contradictory information about Google’s and Facebook’s hiring freezes in the press and on Blind, we decided to ask the people who, outside of Google leadership, will probably know best what’s going on – engineers who are interviewing at these companies right now. In this post, we’ll share what we learned from surveying 1003 of our users.

Why do we care about these freezes at interviewing.io? First off, they affect our users – a good chunk of our users are practicing for upcoming Google and Facebook interviews. Moreover, these freezes materially affect our business. On our platform, you can practice with engineers from a specific company, and many of our users opt to practice with Google engineers before their Google interview and Facebook engineers before their Facebook one. To wit, here is a graph of mock interviews on our platform with Facebook and Google engineers, by week. As you can see, we’re definitely incentivized to care about what’s actually going on with these freezes. 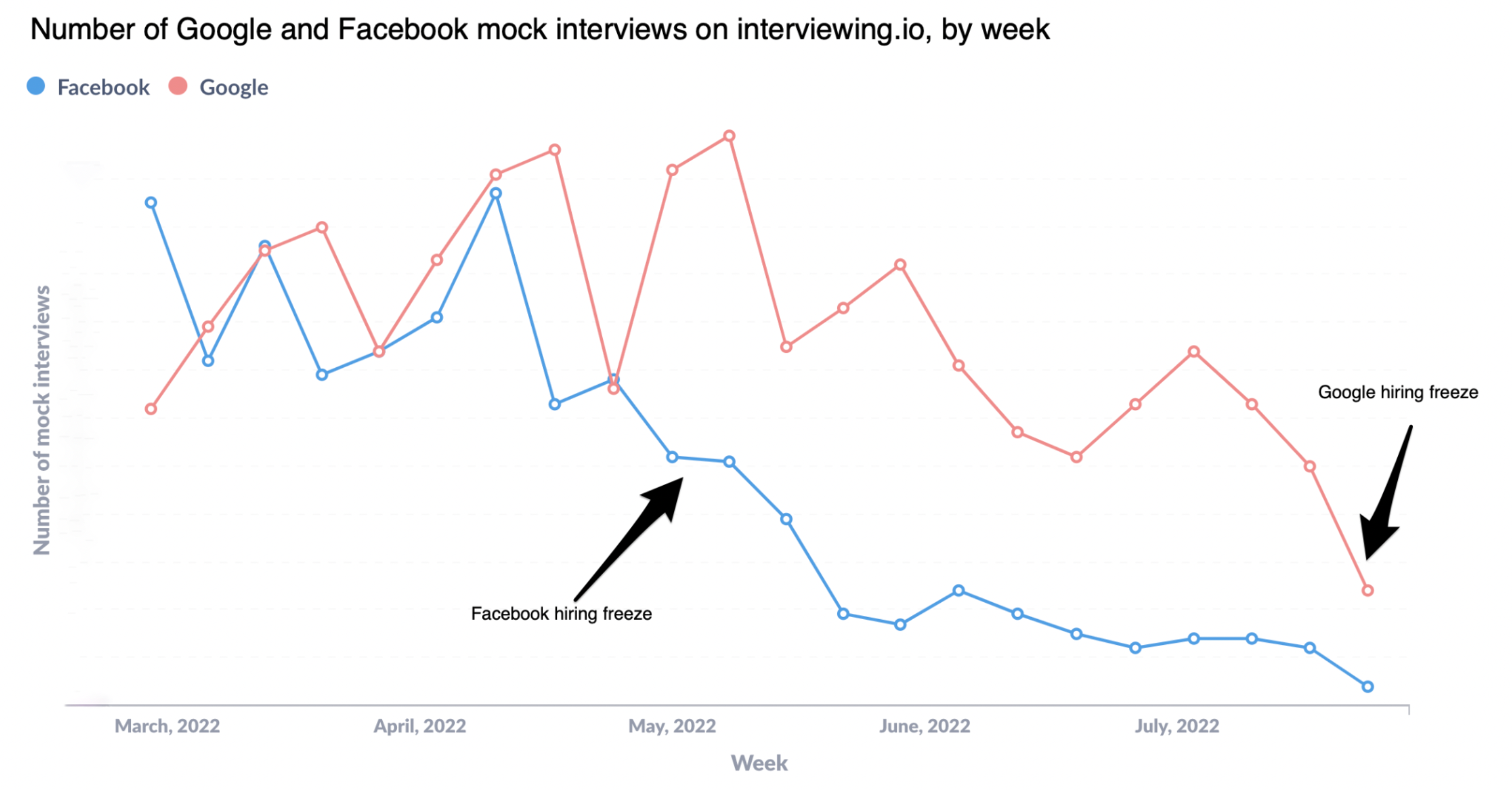 Note that though our user base isn’t a perfectly representative sample of engineers interviewing at Google and Facebook, we have reason to believe that it’s reasonably representative. We’ve been around for about 7 years, have hosted over 100K technical interviews on our platform (split between mock interviews and real ones), and thousands of engineers sign up to use interviewing.io every month. Our average user has 7 years of experience, and about 40% of our users either currently work or have worked at a FAANG company.

Our survey went out to users on July 23rd and got 1003 responses (mostly between July 23rd and July 25th). There were a bunch of questions, but here are the 3 most relevant ones: 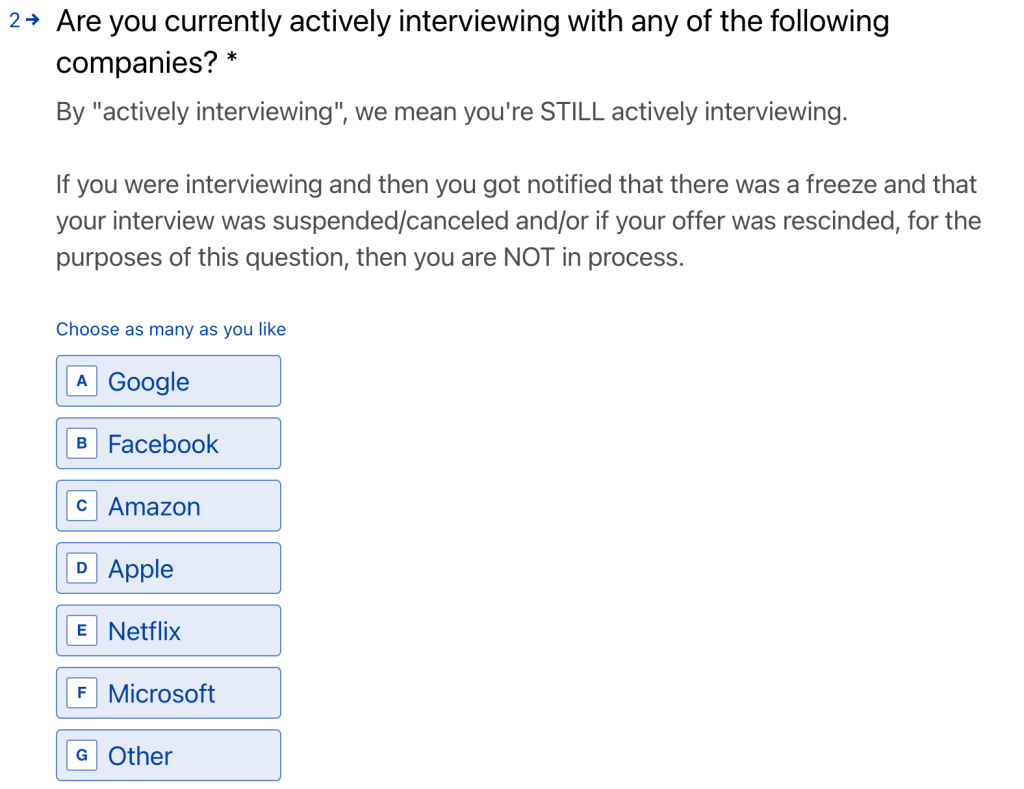 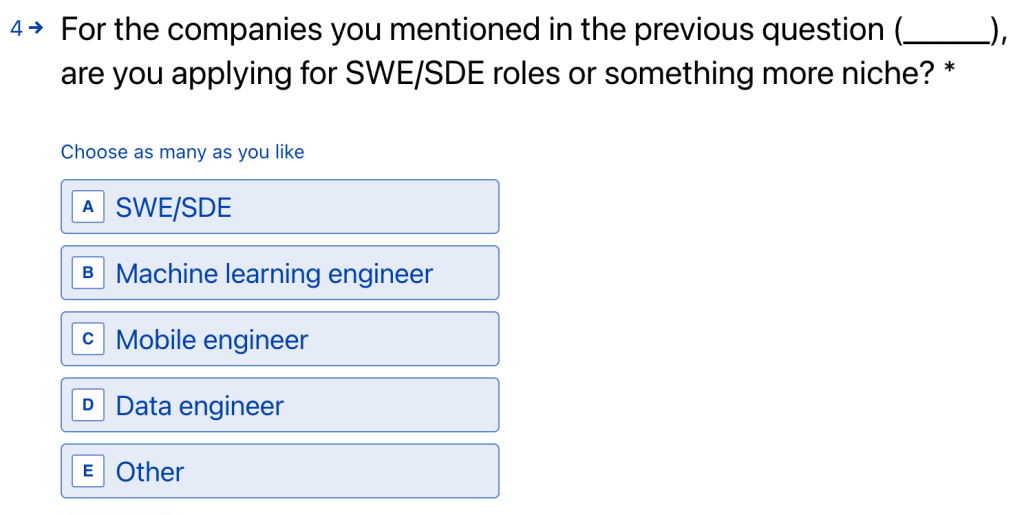 As mentioned above, we had 1003 people fill out the survey. Here’s what we learned. 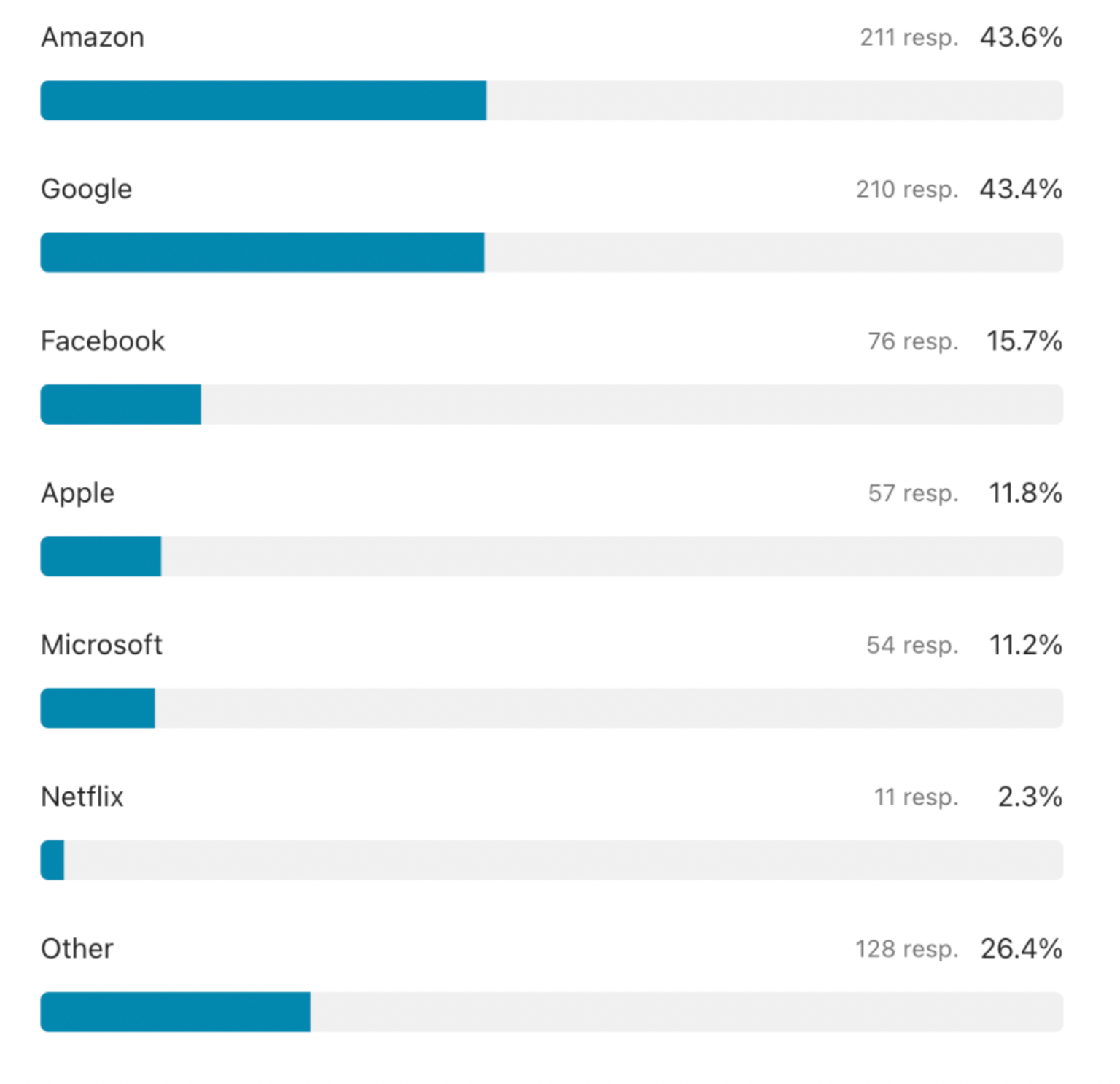 I wasn’t surprised to see Amazon at the top of the list, given that they haven’t announced freezes and are continuing to aggressively hire engineers.1

I was surprised that, despite their 2-week freeze announcement, Google was right at the top as well. Given that Facebook had supposedly been frozen for a while, I was surprised to see them in 3rd position.

So, we dug into the data for Google and Facebook specifically.

Facebook first announced their hiring freeze on May 4th. Though the announcement made it clear that the engineering org would be affected, it didn’t go into detail. Of course, around the time that the freeze was announced, commentary about the freeze also started popping up on Blind (like this one). Consistently from thread to thread, it looked like Facebook froze hiring for engineers below E7, with the exception of Machine Learning Engineers, whom Facebook continued to hire, at all levels.

Based on what we learned from the 76 survey respondents who were actively in process with Facebook, it does appear that SWE below E7 is indeed frozen, but there are some eng functions that are still hiring, in addition to Machine Learning.

We did one other test as a sanity check. What if Facebook was using the hiring freeze as a smoke screen and only continuing with the absolute strongest candidates while keeping the rest on the bench?

Our best insight into candidate ability is how they perform in interviews on our platform (we do both mock interviews and real ones and have hosted over 100K interviews to date). On interviewing.io, every user who’s done at least 2 mock interviews has a score, and this score is a weighted average of coding ability, problem solving ability, and communication on a scale from 0 to 1. We use it internally to figure out who the strongest performers are so we can best match them with companies.

First, we grabbed the overall mean score on interviewing.io, across all users. Then we compared that mean to the mean scores of people who were still interviewing at Facebook. There wasn’t a statistically significant difference. In other words, from what we know, Facebook probably isn’t using their hiring freeze as a smoke screen.

Do you have reliable info that any of the above is incorrect? Email me at aline@interviewing.io.

First off, Google is supposedly going to announce whether the two-week freeze is going to continue, and if so, on what terms, on August 3rd. So there’s a good chance this post will age poorly!

That said, I’m a firm believer in marching on with the information we have at the time, so here goes…

Analyzing Facebook was fairly straightforward because with the exception of a few new pieces of information (e.g. Production Engineering is still hiring), what was in the press and on Blind was consistent with reality. Figuring out what was going on at Google, on the other hand, was a harder task.

Google first announced their hiring freeze on July 20th, following an announcement that hiring would slow for the rest of 2022 but that headcount would remain open in critical roles, including engineering. A Google spokesperson then clarified that over these 2 weeks, Google would be pausing “most offers”.

In our survey, 210 people were actively in process with Google. That seemed high, so I reached out to all of them to get their take on what was going on and to confirm that they were indeed actively in process and not in nebulously waiting for some next step that may or may not come.

The results were fascinating. First, here’s what appears to be true across the board:

The rest is… murky. From what I can tell, different recruiters are telling people different things. Here’s a sample.

I asked my Google recruiter the situation with Google hiring, and they confirmed that for at least L3 Early Career SWE, there [is no headcount] left for 2022…. They also said that other positions (L4+) are still actively hiring.

I just received a phone call from the Google recruiter yesterday. She said that they are slowing down hiring for “early career” developers, which are L3 and L4, for the rest of the year, but higher levels are still in full swing.

I just had a conversation with the recruiter and they HAVE a hiring freeze until Aug 3rd, but they didn’t stop the interviewing and team matching process.

I am currently in a freeze mode with them. I was in the team matching process and after several hiring manager’s interviews, they came to me with the news to wait until they reprioritize stuff.

Google is hiring in full swing… Their engineering teams are going to move people around in two weeks to fill some of the open roles but that’ll not affect much in hiring.

So, according to their response to me, I “may experience some delays in our hiring process” [but] I was specifically told that the hiring process is not halted with me.

I’m in process still, but they said that even if I do well on the interview I [will] not receive an offer until the hiring slowdown ends.

As several of these statements blatantly contradict one another, I went back to the data and ran the same sanity check that I did with Facebook above. In other words, what if Google is using the hiring freeze as a smoke screen and only continuing with the strongest candidates, while keeping the rest on the bench?

As above, our best insight into candidate ability is how they perform in interviews on our platform (see the Facebook section above for an explanation of our scoring system and our approach).

Note that we don’t have a nice, clean table in this section where we show what’s frozen and not, like we did for Facebook, precisely because the results were murky. It feels like Facebook made a clear set of rules and then stuck to them and communicated them effectively to candidates. With Google, it feels like decisions are being made on a case-by-case basis. That said, from this running the numbers and interacting with our users, here’s what we think is going on. 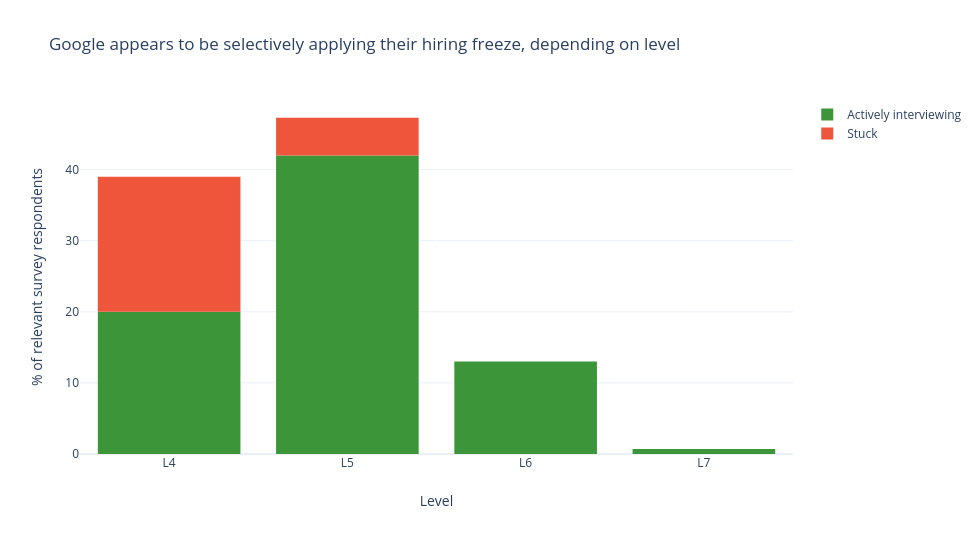 Do you have reliable info that any of the above is incorrect? Email me at aline@interviewing.io.

After running the numbers and talking to our users, it appears that Facebook eng hiring is largely frozen, with some key exceptions. Google, on the other hand, has frozen extending offers for 2 weeks but is still actively interviewing candidates, except for junior ones, sometimes making decisions about whom to interview and whom to pause on a case-by-case basis. We’ll know more about the Google situation in a few days, once the 2 weeks period runs out.

Given that both companies are clearly prioritizing senior eng roles, we shipped something we hope will help. On interviewing.io, you can now choose to practice specifically with a Staff-level (or above) engineer from Google or Facebook. If you’re still in process, and especially if you’re interviewing for L6/E6 or above, this is a direct line to the best-calibrated, most experienced interviewer you can get.

Whether you use us to practice or not, these are uncertain times, and there’s a lot of bad information out there. With this post, we tried to offset it by reporting on what we’ve learned from primary sources, our users who are/were actively interviewing at both Google and Facebook. While I can count on one hand (maybe both?) the limitations to our approach (e.g. our scoring system being inaccurate, sampling bias, people not being honest in their survey responses, not enough data, us failing to analyze certain attributes of candidates, and more), when things are uncertain and you have limited information, you have to do the best you can with what you’ve got.

This analysis started as an internal exercise to help us get some predictability around our usage and our revenue. Then as I started working on it, I realized that people outside of interviewing.io might want to see it too. So I hope you, dear reader, will forgive us our data trespasses and know that we did this work with the best intention in mind – combating misinformation and getting our best attempt at the truth out there.

If you have reliable information that contradicts what you’ve read in this post, please get in touch with me (aline@interviewing.io). I commit to making edits as I learn new things. Finally, a huge thank you to everyone who filled out our survey and answered my annoying followup questions.