How much have 2022 layoffs affected engineers vs. other departments? We dug into the data to find out.

Over the past few months, I’ve seen a number of fear-mongering pieces in the press about how the recession is driving tech layoffs and how tech employees (and engineers specifically) are losing their leverage as a result. Here are a few recent examples:

Articles like these drive engineers to speculate on Blind and on Reddit, in the internet equivalent of hushed whispers, about whether they’re next. Unfortunately, none of the pieces I’ve seen have bothered to draw a distinction between “tech” and “software engineering,” and many even use these terms interchangeably (like the CNN piece above).

The problem is that “tech” can mean anyone working at a tech company. You’re an engineer? Of course, you’re tech. You do ops? Great, you’re tech. You do marketing? You, too, are tech! These are all critical roles, and what I take umbrage with isn’t the decision to label non-engineers as tech employees. It’s deliberately misleading your audience by implying that “tech” refers to engineers specifically.

I don’t like imprecision, and I really don’t like fear-mongering. So, we at interviewing.io decided to dig into the data to see if engineers do indeed have a reason to fear. The TL;DR is that while, yes, tech layoffs have affected engineers somewhat, they are one of the least affected departments. While the existence of layoffs, in concert with eng hiring slowing down in general, does mean that engineers are losing some leverage in the market, it’s nowhere near as dire as the press makes it out to be.

The best source for layoff data

At some point in the last 2.5 years, you’ve probably visited layoffs.fyi. It was launched by Roger Lee in February 2020, just when concerns that this COVID-19 thing might affect the economy went mainstream. The site does exactly what it sounds like – it tracks layoffs at tech companies. Every time a company conducts a public round of layoffs, it gets added to a growing list. Each entry includes a layoff count, and a small subset of entries include a list of actual people who were let go, as well as some info about them (name, LinkedIn, geography, title, and so on). These layoff lists are usually in a Google doc but sometimes in something more fancy, like this dedicated website for Shopify layoffs 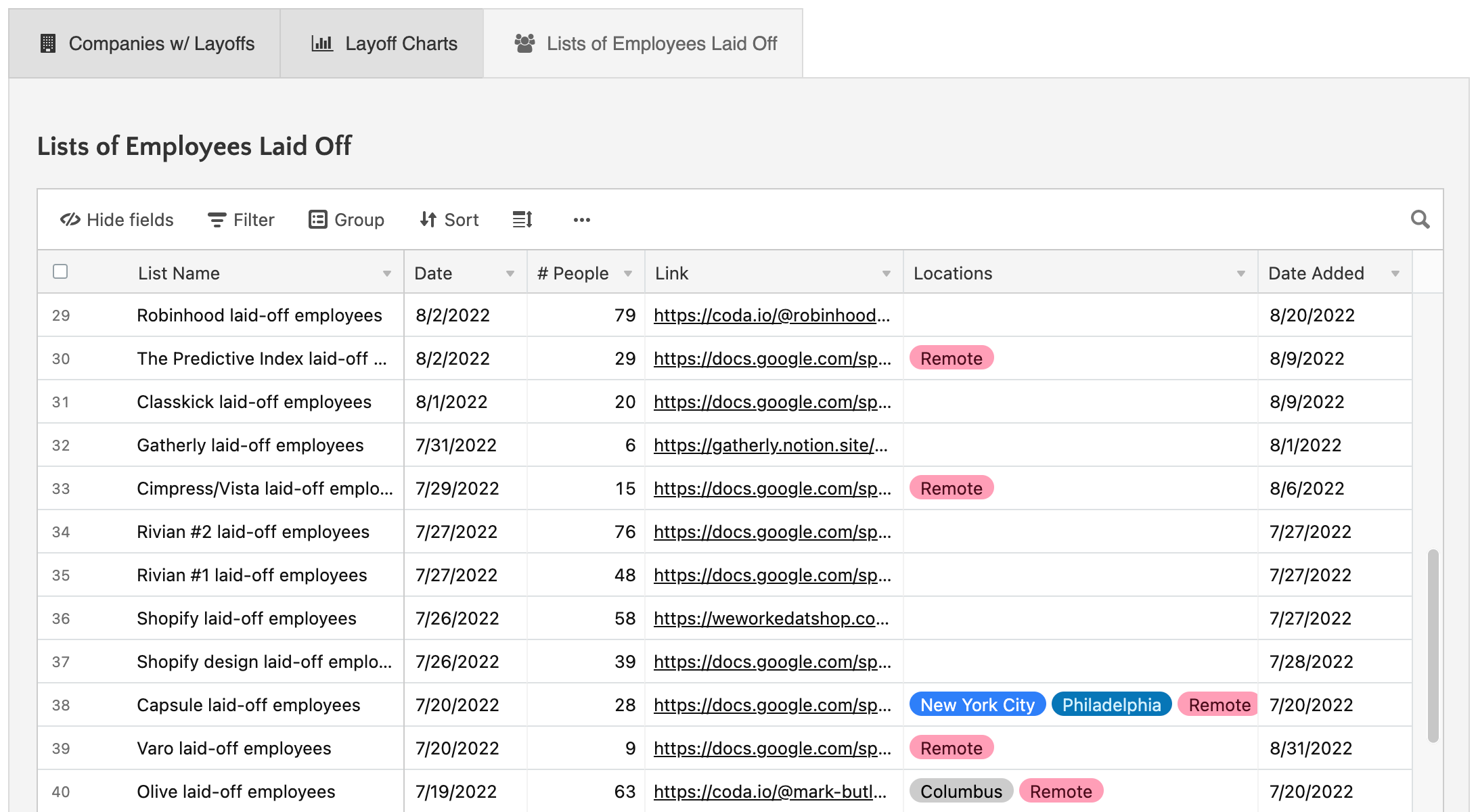 As far as I know, even with its limitations, layoffs.fyi is the best source for layoff data, and because the individual layoff lists actually break out layoffs by function, it’s the natural place to go if you want to disambiguate “tech” into specific departments.

So that’s where we looked. Before we talk about what we did, I’d like to call out one big limitation of the layoff lists on layoffs.fyi.

One big limitation of the data: layoff lists are opt-in

From what we can tell, the layoff lists on layoffs.fyi are opt-in. In other words, former employees decide if they want to be included. Sometimes the difference between the layoff count reported in the press and the length of the list is substantial. Peloton, for instance, had 2800 layoffs, but their list only had 400 people.

If job losers’ willingness to opt in depends on their role, they might be overrepresented in the layoff data. Recruiters, for instance, might be more willing to sign on since they know the value of getting their names out there. Our fix is to calculate opt-in rates for each role and use these as weights in the analysis – just like when the Census upweights groups who are less likely to respond to a survey. For more detail on how we did that, please see the section called “Appendix: Methods” below.

The questions we wanted to answer

To disambiguate “tech layoffs” into actual departments and break out how each department was affected, we needed to answer the following questions:

In the next section, you can see what we learned. If you’re curious how we got to those results, see the section called “Appendix: Methods” at the bottom of the post.

The results, or layoffs by the numbers

What % of employees got laid off overall?

Based on the companies we looked at, at companies where layoffs happened, about 19% of employees were laid off.

What’s the breakdown of layoffs by department?

Below, you can see the % of total layoffs that each department constituted. In other words, of the layoffs that happened in 2022, 20% were salespeople, 5% were engineers, 3% were finance, and so on … and that a third of newly unemployed tech workers come from sales and product.

How hard was each department hit?

The graph above doesn’t give the risk of getting laid off, however. All departments don’t have the same headcount. For instance, according to LinkedIn data, engineers make up about 20% of a company’s total headcount on average, whereas recruiters only make up 2%, about 10X less. In other words, if each department were to be hit equally, we’d expect engineers to be laid off about 10X more often than recruiters. That’s clearly not what’s going on.

To get the full picture, we need to correct for department size and see how hard each department was actually hit, which you can see in the graph below. 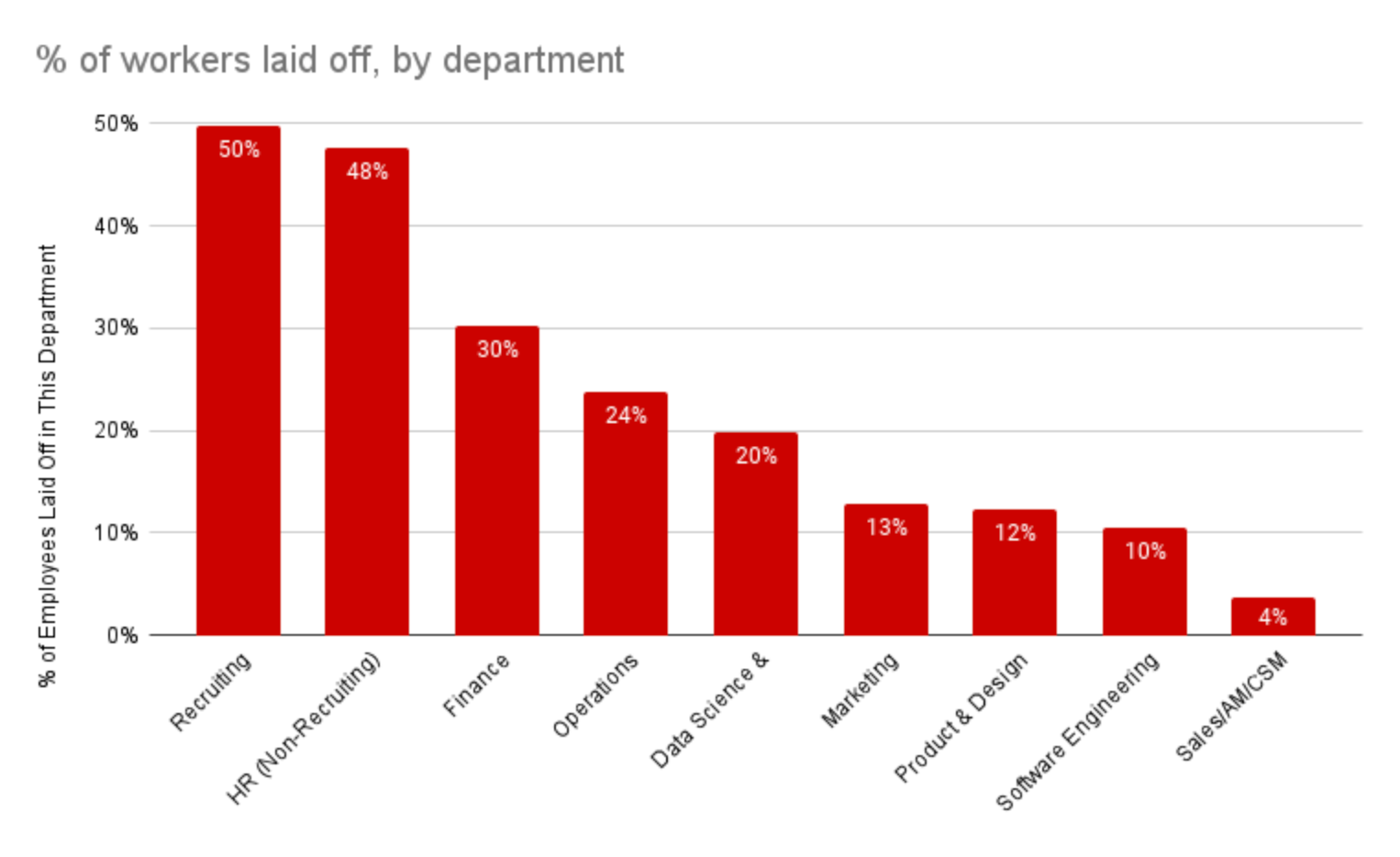 These results show exactly why using the label “tech” isn’t good enough – there is a big disparity between different departments. According to our data, almost half of HR people and recruiters got laid off, as compared to 10% of engineers and only 4% of salespeople. The salespeople percentage shows the need to correct for department size, given that salespeople constituted the biggest % of overall layoffs.

What does this mean for engineers?

Although engineers didn’t emerge from this year’s layoffs unscathed, our data shows that lumping everyone together under the “tech” umbrella is misleading. These insights don’t change the fact that the people who lost their jobs, regardless of department, are hurting, and, unfortunately, layoffs are likely far from over.

That said, HR teams and recruiters were hit the hardest by far. Sadly these teams are often the proverbial canary in the coal mine – when a recession hits, hiring, and especially outbound hiring, is the first to get cut. Engineering, marketing, product, and design were all affected somewhat, and per capita, sales was affected least.

So what does this all mean for engineers? In our minds, the kind of anxiety produced by the news articles I referenced in the beginning is unjustified. Moreover, though hiring has clearly slowed down in the past quarter, after surveying our users, we saw that a healthy amount of companies are still hiring engineers.

However, the reality is that engineers are losing some of the leverage they had previously enjoyed. Given this climate, it’s reasonable to expect that more engineers will be competing for fewer open positions than before, which means that:

interviewing.io is both a mock interview platform and an eng hiring marketplace – engineers use us for technical interview practice, and top performers get fast-tracked at companies. Companies actually interview our top performers anonymously, right on our platform, and leave feedback after each interview. If the candidate passes, they unmask and move to the next step (typically an onsite). Feedback is both quantitative and qualitative, and in addition to telling us if the candidate passed, companies also rate them on technical ability, communication ability, and problem solving ability. Technical ability tends to be most predictive and weighed the most heavily.

As such, to check our read on the market, we averaged the technical scores for successful interviews over the last few quarters to see where the bar has been and where it is now. The results are… compelling. 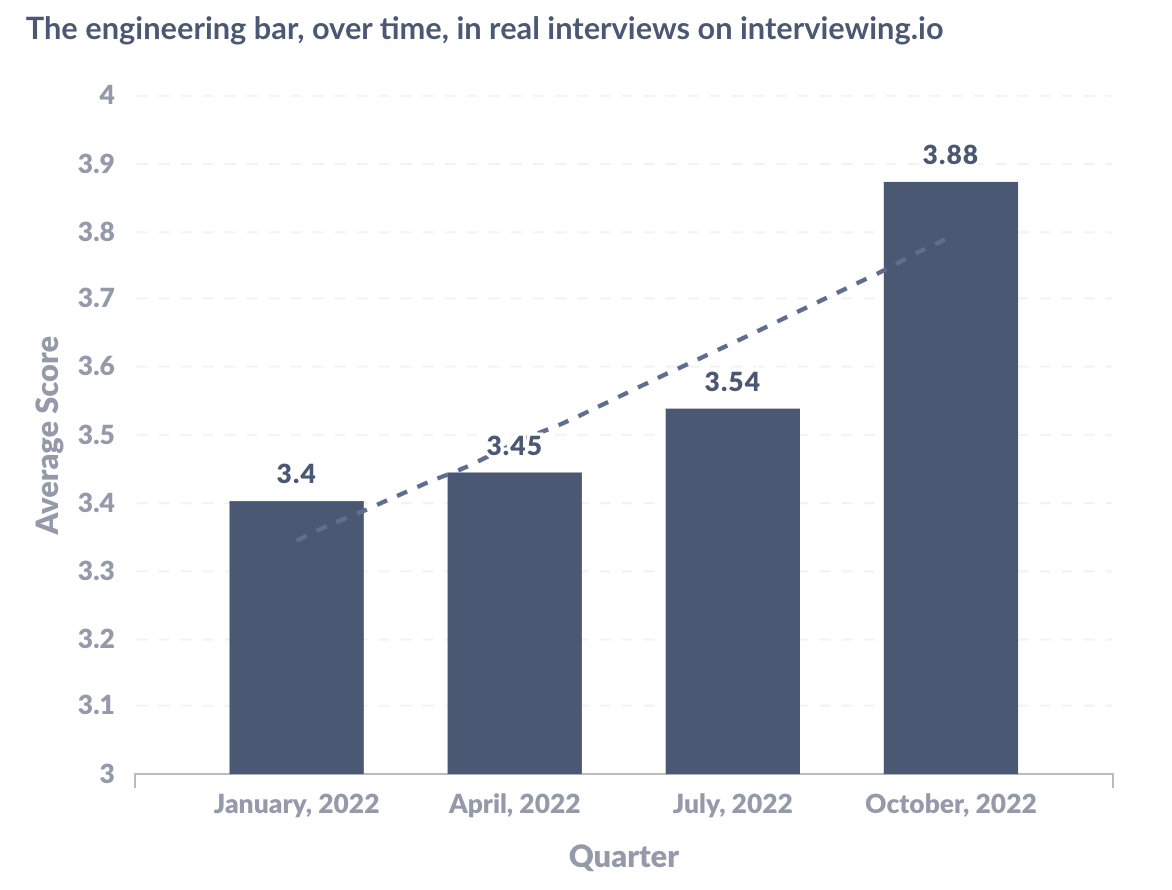 Below is the list of all companies (either US-based or with a significant number of US employees) with layoff lists, through 7/26/22 with Snap (8/31/22) added on. Sadly, there have been more layoffs in the last few months, but at some point we made the call to stop adding new ones so we could actually get this post published. That said, we made the call to include Snap (8/31/22) as a late addition because they had enough layoffs to potentially change the results. Based on layoffs.fyi data, these companies comprise about 15% of tech companies who employed people in the U.S. and had at least one round of layoffs in 2022.

For each of the companies above, we did the following to get layoff counts by department: 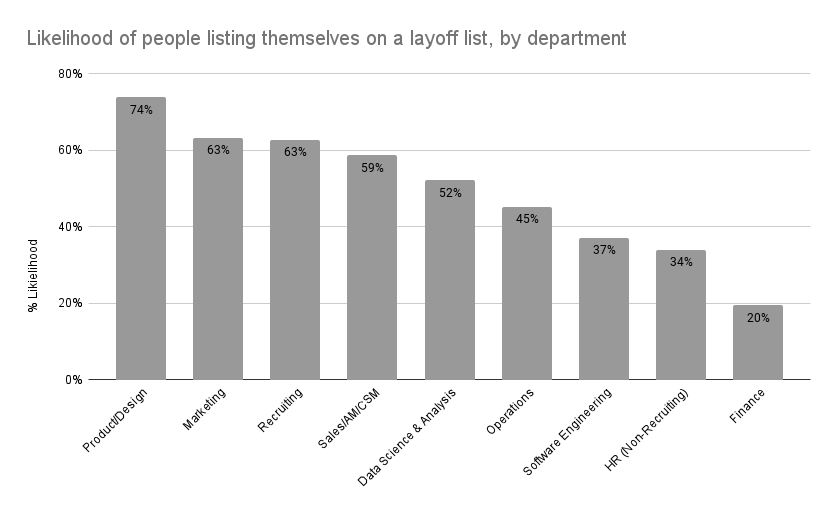 Thank you to Sam Jordan, Liz Graves, Santiago Munoz, the broader interviewing.io team, David Holtz, and Maxim Massenkoff for their help with this piece.